On Wednesday, thousands of anti-abortion activists gathered in Washington, D.C. to march and pray for an end to abortion. While the 41-year-old March for Life has focused solely on limiting abortion rights in the past, this year, the March got a new theme: adoption.

Pregnancy crisis centers have been plugging adoption as an abortion alternative for years, but the larger pro-life movement is now embracing it as a friendlier way to reach women. Perhaps because of this new marketing plan, a smaller subset of anti-abortion activists got more vocal this year. They are people who were conceived through rape and incest. Most were adopted into new families and think all babies conceived through the same horrifying circumstances deserve, in their words, the “right to life.”

We first noticed the conceived-by-rape coalition thanks to this photo by National Review‘s Kathryn Jean Lopez, taken at the march yesterday: 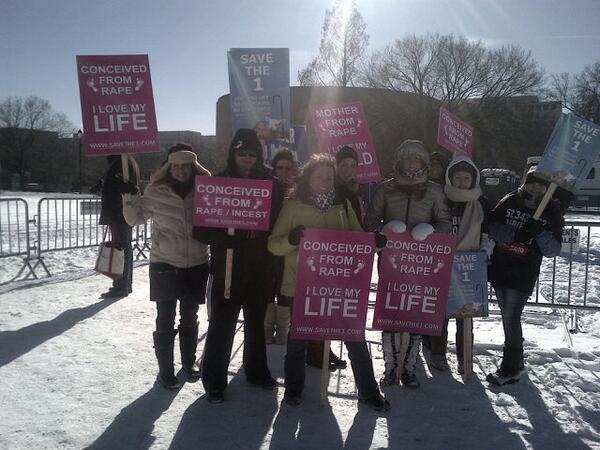 It’s jarring — and effective. Libertarian blogger Andrew Klavan writes at the conservative site Truth Revolt on Thursday that the women in these photos helped change his mind about abortion. He now thinks the practice should be illegal under all circumstances.

Texas Gov. Rick Perry had a similar change of heart after meeting with anti-abortion activist Rebecca Kiessling, who was conceived by rape. Before the 2012 election, she talked with Perry, explaining to LifeNews.com that the meeting went something like this:

Perry now insists that the life of the mother should be the only exception when it comes to abortion.

Kiessling is perhaps the most famous conceived-by-rape speaker. She was conceived in 1968, before Roe v. Wade. Still, she says she was “targeted for abortion,” and that her biological mother almost aborted her twice in dangerous, illegal situations. Despite, or rather, because of her mother’s experience, Kiessling does not think abortion should be legal under any circumstances. About 20 percent of the American population agrees with her. On her website, she tells her story:

I was adopted nearly from birth. At 18, I learned that I was conceived out of a brutal rape at knife-point by a serial rapist. Like most people, I’d never considered that abortion applied to my life, but once I received this information, all of a sudden I realized that, not only does it apply to my life, but it has to do with my very existence. It was as if I could hear the echoes of all those people who, with the most sympathetic of tones, would say, “Well, except in cases of rape. . .  ,” or who would rather fervently exclaim in disgust: “Especially in cases of rape!!!” All these people are out there who don‘t even know me, but are standing in judgment of my life, so quick to dismiss it just because of how I was conceived. I felt like I was now going to have to justify my own existence, that I would have to prove myself to the world that I shouldn’t have been aborted and that I was worthy of living.

Kiessling is not alone. Abstinence educator Pam Stenzel (Catholic high school students may remember her from her truly frightening sex-ed videos) was also conceived by rape before Roe v. Wade. Her bio:

In 1964, a fifteen year old girl was raped, became pregnant, and decided to carry her unborn child to term. Five months after the baby girl was born, in an act of courage and love the young mother provided her child a better environment by giving her to an adoptive family. That child was Pam Stenzel.

Stenzel repeats Kiessling’s plea in the “Conceived in Rape Trailer” below: “I did not deserve the death penalty for the crimes of my father.” The video features the testimonials of Stenzel, Kiessling, and other women conveived by rape.

While an even smaller subset of the anti-abortion crowd admits to being conceived by incest, they are out there. Robert Bennett’s story was republished by TheUnChoice.com after he spoke to the South Dakota legislature about abortion. Bennett claims that his mother’s pregnancy stopped his grandfather from raping his mother and aunt:

My biological father just so happens to be my grandfather. I found out he was an alcoholic and had been raping both of his daughters, my mom and my aunt since the early 1960’s. It happened for years till my mother conceived me from it. My aunt never did get pregnant, but the rapes stopped for them once my mom became pregnant and gave birth to me. It took one of his daughters who he had been raping for years to get pregnant for this to stop. You must understand that my life helped to protect my mother from being raped any further by her father.

Anti-abortion activist Kristi Hofferber was also conceived by incest. Her biological father only served 18 months in prison, and she thinks that if the court had been made aware of her birth, she would have been the evidence needed to give him a longer prison sentence.

The stories are all different, but the message to those who think abortion should be legal in the case of rape or incest is the same: Would you want us to be dead? Why should we be punished for what our fathers did? The children of incest often think that their births saved their mothers from repeated attacks.

Not all activists have made their personal stories public, but they support the cause and identify themselves as being conceived by rape. The women in Lopez’s photo are members of Save the 1, a group who’s mission is to make abortion illegal — no exceptions. Kiessling thinks this is possible. Most conservatives don’t. After the 2012 election, Ann Coulter wrote in TownHall:

No law is ever going to require a woman to bear the child of her rapist. Yes, it’s every bit as much a life as an unborn child that is not the product of rape. But sentient human beings are capable of drawing gradations along a line.

Kiessling responded on Save the 1’s website: “‘No law is ever going to require a woman to bear the child of her rapist.’ I don’t believe that. Laws DID protect children like me and these protections can and should be restored.” Some might say that women like Kiessling’s mother were victims of the illegal-abortion era — they were faced with horrible circumstances and limited options. The children of these women see the 1960s differently. Kiessling insists,

Please understand that whenever you identify yourself as being pro-choice, or whenever you make that exception for rape, what that really translates into is you being able to stand before me, look me in the eye, and say to me, “I think your mother should have been able to abort you.”