First, in 2008, a 30 year longitudinal study of 500 women found that post-abortive women had about a 30% higher likelihood of subsequent mental problems than non-abortive women (the “attributable risk” estimate of 1.5-5.5% is a less reliable statistic that attempts to calculate how much abortion, itself, without considering any other factor, contributes to mental health problems.  It is a deceptively small percentage because  so many factors influence mental health that almost all such analyses yield very small numbers.)

Now, the July issue of Psychiatry and Clinical Neurosciences describes a review of all abortion and mental health literature between 1995 and 2011.  Their findings?  Out of 36 studies reviewed, 13 found post-abortive women at higher risk of depression, anxiety, or substance abuse.  The review also found  that while short-term anxiety and depression were more common among women who miscarried than women who had abortions, longer term anxiety and depression were much more common among post-abortive women than women who miscarried.  That makes sense considering that factors surrounding each set of circumstances (i.e., in miscarriage, women are encouraged to grieve.  With abortion, women are told they have nothing to grieve.  It takes time for the denial to wear off and the emotional disturbance to be recognized.)

One of the main arguments given for legalizing abortion in Ireland is that troubled women would become suicidal if they were forced to carry their pregnancies to term. Ironically, this was originally how abortions were made available in many US states before Roe versus Wade – as Dr. Bernard Nathanson describes in his books Aborting America and The Hand of God.

A woman in pre-Roe versus Wade New York, which had abortion laws more liberal than most of the other states, had to go to a psychiatrist and claim that she was emotionally unbalanced and would commit suicide if she was not allowed to abort her baby. Many of these meetings became “rubberstamping” sessions with their own script – a woman would say the right things, pay her hundred dollars for the “session”, and receive written permission to have an abortion, which she would then take to the abortion provider. This legal situation opened the door for abortion on demand.

But the underlying question is this: does having an abortion reduce a woman’s risk of suicide? Quite a few studies have been conducted addressing this question – and the answers they provide are very one-sided.

Researchers in Finland interviewed 600,000 women for a study that showed that women who became pregnant and had abortions were six times more likely to commit suicide than women who carried their pregnancies to term. Women who aborted were three times more likely to commit suicide than those who had not been pregnant. The statistics show that rather than increasing a woman’s chances of suicide, carrying a baby to term actually decreases them.(1) Also noteworthy was the fact that the study was based not only on interviews but also on medical records. This reliance on records in addition to testimony helped the study avoid “recall bias.” Recall bias is a phenomenon that sometimes skews the results of abortion related studies because many women who have had abortions are not willing to talk about them and will not reveal them on a questionnaire, even when asked.

A related study, in the European Journal of Health, found similar results. This study tracked 463,473 women who became pregnant between the years of 1980 and 2004 and recorded their mortality rates after either giving birth or having abortions. They found that women who had abortions were more likely to die within 10 years after their abortions than women who carried to term. Suicide was a common cause of death for these women.(2)

Another study in The British Medical Journal discovered that the rate of suicide in women after birth was 5.9 out of 100,000. Among women who had abortions, the rate was 34.7. The suicide rate for women who had not been pregnant was 11.3.  Again, carrying a pregnancy to term was seen to reduce the suicide rate.

Another study, conducted by David C Reardon of the Elliot Institute, studied 173,000 American women who became pregnant and then either had abortions or carried to term. The survey followed them for eight years after the pregnancy ended. Reardon found that women who aborted were 154% more likely to commit suicide than women who gave birth.(3). Another survey cited by David Reardon in his book Aborted Women, Silent No More (Springfield, IL: Acorn Books, 2002) discovered that up to 60% of women who had abortions had subsequent suicidal feelings, with 28% actually attempting suicide.

The magazine Women’s World reported a study of aborted women in which 45% said they had thoughts of suicide following their abortions.(4)

The statistics are even grimmer for teenagers. One study found that teenage girls who had one or more abortions were 10 times more likely to commit suicide than those who never aborted. (5)

Another study revealed that the rate of psychiatric hospitalization for teenagers who had abortions is three times higher than that of other teens.(6)

Is a lie to say that suicide can be prevented by abortion – both statistics and personal testimony show that the opposite is true.

You hear it everyday … TV, radio, internet, newspapers. Forty years after legalization in the United States, abortion remains a hot and divisive issue. But in the wake of the over 55 million abortions having been performed in the United States since 1973, remain the multitudes of “silent sufferers,” for whom abortion has been a traumatic life-changing experience.

Who are these “silent sufferers”? They are family members, neighbors, co-workers, those sitting next to us in church. With 43% of American women having had an abortion, there is a strong likelihood that half of the people you come in contact with have been affected from their decision to abort, many exhibiting symptoms of Post Abortion Stress.

Haven’t heard of Post Abortion Stress? Not surprising. We hear about the effect on babies that are aborted, but little attention is paid to what happens after to those that are left behind living with the decision. Post Abortion Stress is a term first coined in 1981 from a group of researchers who reported, and peer-reviewed research increasingly confirms since, that abortion functions as a stress that places women at higher risk for developing a range of mental health problems, such as depression, loss of self-esteem, self-destructive behavior, self-hatred, drug and alcohol abuse, sleep disorders, memory loss, sexual dysfunction, chronic problems with relationships, dramatic personality changes, anxiety attacks, guilt and remorse, difficulty grieving, increased tendency toward violence, chronic crying, difficulty concentrating, flashbacks, loss of interest in previously enjoyed activities and people, and difficulty bonding with later children. It is not uncommon that symptoms lay dormant until later in life.

A study of the medical records of 56,741 California medicaid patients revealed that women who had abortions were 160 percent more likely than delivering women to be hospitalized for psychiatric treatment in the first 90 days following abortion or delivery. Rates of psychiatric treatment remained significantly higher for at least four years.

In a study of post-abortion patients only 8 weeks after their abortion, researchers found that 44% complained of nervous disorders, 36% had experienced sleep disturbances, 31% had regrets about their decision, and 11% had been prescribed psychotropic medicine by their family doctor.  A 5 year retrospective study in two Canadian provinces found significantly greater use of medical and psychiatric services among women with a history of abortion. Most significant was the finding that 25% of women who had abortions made visits to psychiatrists as compared to 3% of the control group.  Women who have had abortions are significantly more likely than others to subsequently require admission to a psychiatric hospital. At especially high risk are teenagers, separated or divorced women, and women with a history of more than one abortion.

Since many post-abortive women use repression as a coping mechanism, there may be a long period of denial before a woman seeks psychiatric care. These repressed feelings may cause psychosomatic illnesses and psychiatric or behavioral in other areas of her life. As a result, some counselors report that unacknowledged post-abortion distress is the causative factor in many of their female patients, even though their patients have come to them seeking therapy for seemingly unrelated problems. 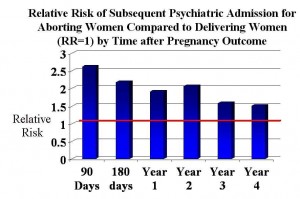 Rate of hospitalization after abortion compared to childbirth=1.0

In a study of post-abortion patients only 8 weeks after their abortion, researchers found that 44% complained of nervous disorders, 36% had experienced sleep disturbances, 31% had regrets about their decision, and 11% had been prescribed psychotropic medicine by their family doctor.  Women who have had abortions are significantly more likely than others to subsequently require admission to a psychiatric hospital.  As especially high risk are teenagers, separated or divorced women, and women with a history of more than one abortion.

Because the woman endured the abortion physically, her emotions differ from other post-abortive individuals. In denying the maternal instinct to “protect your young,” the woman has short-circuited many emotions that will come to the surface in distant years.

Here are some groupings of PAS women based on their situation at the time of the abortion:

~The young teenager whose parents insist upon abortion.

~A woman pregnant by rape — society insists that abortion is the only option.

~Many women involved in abusive relationships perceive abortion as the only way to live — they could be beaten to death if they made another choice. In other works, their child would eventually die anyway at the hands of the abuser.

~Mothers who want the child but discover the possibility of genetic defects and are strongly advised to abort.

~Health of the mother — the physical pregnancy could kill them.

~In some Far Eastern countries, where the loss of virginity is punishable by death, abortion is the only viable choice.

~Incest is perhaps the most difficult dilemma. Consider an uncle who has impregnated his niece. He simply takes her to an abortion clinic, signs the papers assuming the role of her father, and she is led away for an additional abuse. The uncle is then free to continue to have sexual relations with her.

Regardless of the reasons for the abortion, the resulting emotional, spiritual and psychological pain is the same. However, the focus of their anger may vary.

The Emotional Effects of Abortion

This is a partial list of symptoms drawn from a survey of 260 womenwho, on average, had their first abortion 10.6 years prior to being surveyed. These women were volunteers who either were seeking post-abortion counseling, had participated in post-abortion counseling in the past, or had a history of prior abortion and were seeking help at a crisis pregnancy center to carry a subsequent pregnancy to term.